A few years ago, I came across a map which had a Sovereign Class vessel - the Enterprise-E, which had the ability to cloak. At the time I did a little research, but could not replicate the ship.
October 2004, and once again I come across an 8 player map : cgs1-1.bzn    This map included one Enterprise-E vessel in the top middle sector-  which could cloak - quite a stunning thing to see.

After much research and editing at the ASCII code level, it was discovered how to recode a federation sovereign class ship into an 'f6ente' vessel

In the core Armada ODF files there is an Enterprise-E Vessel that was designed by the original game producers - although it is not available to build in the main game. Neither is the ship listed in the Star Trek Armada Map Editor menu.

So....after a fair bit of work, a program was created that can batch file convert any Enter-E, into a cloakable version - pretty clever huh !

The Ship Editor software was produced as a collaboration between myself (Philip Calrissian, aka : Mighty Santa) and Mighty Digitotialis. The original hope was to at least replicate the original cloaked Sov' as found in the CgS map, and maybe create a few fun fleet/mini-war maps where players could make good use of a cloaked sovereign.

Hopefully, you can come up with some interesting maps that will make use of the Sovereign's cloaking ability. There is certainly some good potential for fleetwar maps, and maybe 'osama'/'Bushwar' type maps where the enemy could start off with a few fleets of cloaked sovs. Happy map making.

The software that you need to convert ships is the 'cloaking_device_ship_editor' program : size 328kb. 1min @ 56k

Once downloaded, you should now have on your desktop this little icon....

The file is an executable file, and you may well wish to scan it with a virus checker before you run it.

First, start up the program. 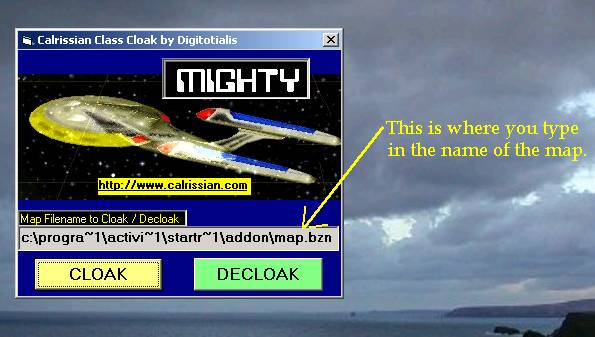 You should now type in the name of the map which contains the Enterprise-E vessels which you wish to have the cloaking ability. The map name must end with .bzn   You should now click on 'CLOAK'. The program will now edit the .bzn file and convert any Enterprise-E ships to a cloaking variety. It is an essentially instantaneous process.

You should have now received a message which confirmed whether any ships were converted.

1. At present the ONLY ship that you can convert to cloaking technology is the Enterprise-E Sovereign Class vessel.

Ordinary Sovereign Class ships are NOT able to be converted using this software. If you are a map maker, then you will need to be using Picard's ship - which is found via the F10 key in the map editor.

2. There is a trade-off to be made for Sov's that are able to cloak.

At present any Enterprise-E Vessel that is converted to Cloak loses it's Corbomite shield weapon. This may seem like a real big loss, but any map maker can always boost the shield strength of a ship to counter the lack of this useful technology.

3. For a ship to Cloak, it needs 100 units of energy. Some maps will have Enterprise class vessels that start off with zero energy, and thus a ship may need 5-10 seconds from the start of a game to charge up enough power to be able to cloak.

4. Does converting the ships mean my customised .bmp image will revert to the basic unedited version ?

No. You can cloak/uncloak your Enter-E class ships as often as you like, and it will NOT change the .bmp image of your map. The software only edits the .bzn file of the map (note that each map is made up of a .bmp, .bzn. and an .mdf file).

5. For ALL map makers, please do NOT over-write or convert ships for any existing Armada map. To do so is to destroy the work of a previous map maker.
For instance, you may wish to create your own version of a map. The first thing you should do is load the map via the armada map editor, and then save the map as a different name. Thus, you have preserved the original map, but you now have your own version which you can mess around with all you like.

*it remains a real problem in armada, that there are a few people who edit maps someone else has made, but who then save their version of the map under the same name - thus destroying the original authors work. Worst still, in multiplayer, if this same map maker is hosting the map, anyone with the older version will have their copy over-written. Frankly, this drives me utterly insane with rage !
Do not destroy others work !

6. When the map is hosted in instant action or multiplayer, does 'free tech' need to be on ?

No. You do not need free tech on for the cloak to work, although of course if you have other ships on the map - Cubes for instance, if you want them to have their special weapons working, then 'Free tech' WILL need to be on.

Yes, myself and Digitotialis are researching whether it is possible to also cloak a Locutus Cube ;) and any other ship for that matter.

Click on the thumbnail for a full size version.

Cloaked Enterprise-E : note the stars you can see through the hull of the ship, it is cloaked !

Latest version : 1.0 : released 19.10.2004
The Cloaking Device Ship Editor program was written by 'Mighty Digitotialis' - a computer programmer from the USA. Any person who wishes to 'mod' this software should at least acknowledge & retain the original designers name on any modded version.

I would like to thank CgS clan - or whom ever it was, that originally researched and produced the cloaking Enterprise E'.

*If you have any comments/suggestions about the ship editor software, then please post them in the Calrissian.com Armada Forum, or you can Contact 'Calrissian' aka 'Mighty Santa'.